Within the project, at least 30 houses will be purchased, in Cluj-Napoca and the surrounding localities. END_OF_DOCUMENT_TOKEN_TO_BE_REPLACED

During the project, a Community Social Centre will be established, which will aim to implement and develop services END_OF_DOCUMENT_TOKEN_TO_BE_REPLACED

Throughout the project, we will organise support groups for teenagers from the families of the resettlement program. END_OF_DOCUMENT_TOKEN_TO_BE_REPLACED 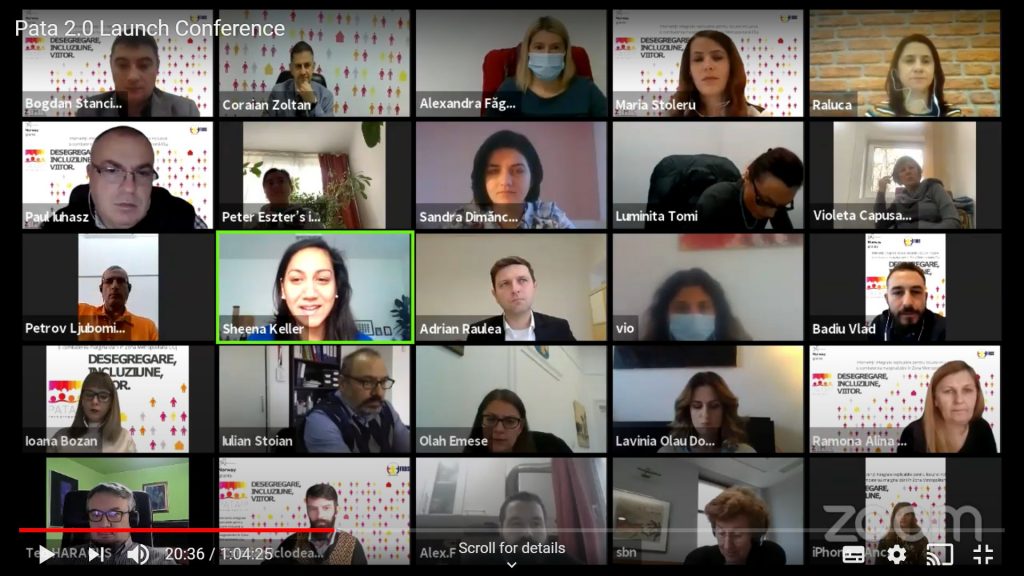 Screenshot during the conference

Cluj Metro Area organised on Thursday, November 12, the launch and presentation conference of the project Pata 2.0

The most consistent item on the agenda was presented by CMA projects director Adrian Răulea, acting manager of Pata 2.0, who talked about the background of the project, its key facts, objectives and steps taken so far. From the CMA team also spoke the general manager, Zoltán Coraian, and the community facilitator Alexandru Fechete.

H.E. Siri Barry, Norway’s ambassador to Bucharest, informed, in her speech, about the massive financial support the Kingdom of Norway is offering for solving social problems in Romania, through EEA/Norway Grants, and was optimistic about the results of this project. “We have confidence that the project promoter [CMA] and its partners will make every effort to achieve the expected results and will manage to improve the lives of the beneficiaries,” Her Excellency said.

Deputy Mayor Oláh Emese said that the Cluj municipality is aware that the problem of housing is currently the biggest challenge for the community living in Pata-Rât and that, at this moment, the Cluj-Napoca City Hall, on its own, cannot solve the problem, so that projects such as Pata 2.0 are more than welcome and have all the support of the local administration. She noted that the City Hall has allocated generous amounts for the purchase of social housing on the free market and supports through subsidies the payment of rent for vulnerable people, but that this is a “lasting process”. “It is doubtless that the previous project, Pata-Cluj, was a good start. I want to assure you that the Cluj-Napoca City Hall is a reliable partner in this project and we will support it with all its strengths,” said the deputy mayor.

Sheena Elaine Keller, from the managing body of the EEA/Norway Grants at EU level, said in her statement that the project Pata 2.0 can become an example not only in Romania, but also in other countries, and for other funding programmes.

This project, in my opinion, illustrates the essence of the approach that these grants support when it comes to Roma inclusion and empowerment. Combating marginalisation is one of the most complex problems and requires multi-pronged efforts, effective coordination and strong commitment from all stakeholders. I believe that the previous project has shown that this is possible and has had tangible, long-lasting results. (...) I believe that the current project also has a huge potential to become an example, one that sets out approaches and initiatives, not only in Romania, but also in other countries. We have noticed that there is also interest from other partners, and other programmes, about how we could implement an integrated approach to social housing in an innovative way. (...) Through such approaches as those in the present project, we will be able to remove the barriers between the Roma and the rest of society", said Mrs. Keller.

Ms. Mihaela Peter, Executive Director of the Romanian Fund for Social Development, drew attention to a possible trap, namely the too great expectations that Pata 2.0 could raise.

I believe that this project has all the ingredients to achieve its objectives and indicators. And we have no concern, from the point of view of the programme operator, about the successful completion of this project and the proper spending of the funds. However, we are concerned about this great challenge, which are the great expectations. And we believe that these expectations come not only from the Pata Rât community, but also from neighbouring areas, Cluj County, and Romania and Europe in general. We know that with this financial allocation, which is not an enormous one, you will not be able to solve all the problems in Pata-Rât. It is important to make the community understand that this intervention is a pilot, which will not be able to solve all the social problems that exist in the area", said Mrs Peter.

A question-and-answer session ended the conference. There were 50 participants, guests and members of the project team. The event took place through video link and was broadcast live on YouTube.Link for watching)